As warm, moisture-laden air from the Carribean is pushed up the mountain ranges of the continental divide, the decrease in air pressure and temperature causes the water in the air to condense, soaking the high mountaintop forests with nearly constant mist and precipitation.  Every available surface in these forests - tree trunks, limbs, logs, and even leaves - has been colonized by ferns, mosses, lichens, liverworts, orchids, and bromeliads, which collect water from the mist and shower the forest below.  The most famous of the Central American cloud forests is Monteverde.

The forests surrounding Monteverde are a world-renowned birding hotspot; dozens of highland bird species, endemic to the cloud forest, can be found in the parks and preserves of Monteverde.  On Saturday, the NPARS team left the Nicoya Peninsula for its annual side-trip to the birding mecca of Monteverde. 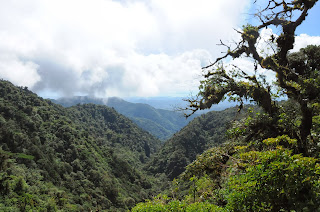 Posted by Tyler Christensen at 1:54 PM No comments:

On the southern coast of the Nicoya Peninsula, where the Rio Bongo meets the Pacific ocean, is an estuary containing expansive coastal mangrove habitat.  Habitats such as these are home to a number of bird species found nowhere else but among mangroves, and many have received such apt names as Mangrove Black-Hawk and Mangrove Vireo.
We had barely penetrated the mangroves when we spotted our first mangrove endemic, the Mangrove Cuckoo.

On our way back from Playa Coyote and the estuary, we passed many hundreds of acres of grazed cattle pastures.  Their artificial presence notwithstanding, they can be good places to find grassland species like the Double-striped Thick-Knee, as well as wintering migrants like Eastern Meadowlarks and American Kestrels.
Next week, after finishing our banding session at Reserva Nacional Cabo Blanco, the NPARS team is heading inland for a few days of birding in the cloud forests of Costa Rica.  We'll be writing the next few posts from Monteverde, a world-renowned birding destination, distinguished by birders for its assortment of rare endemic highland species.  Stay tuned!
Posted by Tyler Christensen at 7:50 PM No comments:

Banding Ruby-throats at the Finca

We have ten species of hummingbirds that regularly visit the feeders here at Finca Pura Vida, including one which we have the great pleasure of knowing on both ends of its range, the tiny Ruby-throated Hummingbird (pictured below).  Weighing in at just 3.5 grams (less than the weight of a nickel), they are the smallest hummingbird that visits the feeders at the Finca.  They are also distinguished by the fact that they are the only species found here that migrates to and from North America, often travelling 600+ miles nonstop across the Gulf of Mexico to reach Middle America sooner. 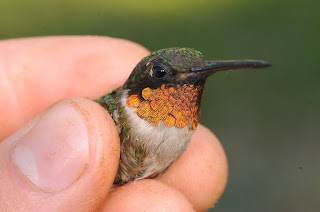 In the interest of providing data for studies involving demographics of bird populations, we must determine the age and sex of each Ruby-throated Hummingbird we capture and band.  Only adult male Ruby-throats have the ruby-throat, which makes identifying adult males a cinch.  Things get a little tougher, however, when faced with immature males, immature females, and adult females, all of which can look remarkably similar (an immature female is shown below). 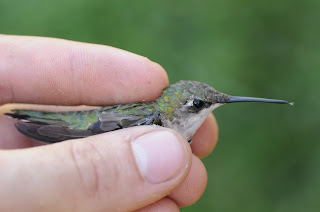 It is not impossible to determine the sex and age of most of these confusing Ruby-throats; in fact, with some practice, just about every bird we catch can be assigned to one age/sex class.  Many - but not all - immature males have some "stubble", some dark stippling on the throat where the ruby gorget feathers are soon to appear.  Some begin acquiring ruby throat feathers around this time of year, which facilitates their identification as males, as pictured in the photo below of a male with a partial ruby gorget.


Another way to check the bird's sex is to note the shape of the bird's sixth primary flight feather (the feather on the left in the photo below); the tip of the feather is rounded in females, and pointed in males.  The wing pictured below belongs to an adult male. 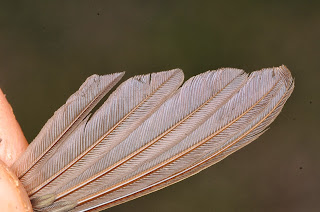 It is astounding that these tiny birds weighing less than a teaspoon of sugar can travel many hundreds of miles to spend the winter in tropical climates.  The fact that we have such a high concentration of these little creatures here at Finca Pura Vida means that we can contribute much-needed information about their poorly-understood winter biology.  What more could a group of bird-lovers ask for? 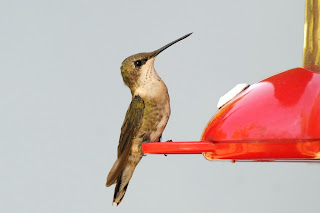 Posted by Tyler Christensen at 12:38 PM No comments:

The Curu Wildlife Refuge, a privately owned nature reserve about a half-hour's drive from Finca Pura Vida, boasts a high abundance and diversity of birds.  The refuge contains coastal mangrove forest and second-growth humid forest in varying stages of succession.  Our banding table is located in an abandoned mango plantation whose trees have aged to the point where they are no longer productive.

The instant our first mist net was opened at 5:45am on Wednesday, a Common Paraque (below) came out of nowhere through the still-dark forest and flew directly into our net. 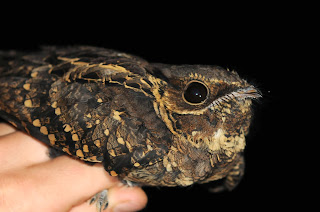 Paraques belong to the Nightjar family, or Caprimulgidae, a group known affectionately as the Goatsuckers.  Unfortunately, the Caprimulgids owe their family name to a folk myth that they sucked milk from the udders of farmers' goats.  In the real world, however, the "goatsuckers" are major nocturnal insectivores, using their ludicrously wide mouths to catch insects on the wing. 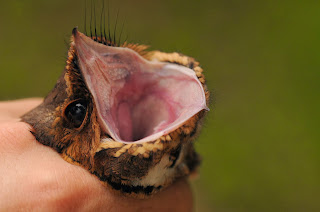 Other highlights from the week included numerous Prothonotary Warblers, Northern Waterthrushes, Black-headed Trogons, Green and American-Pygmy Kingfishers, Philadelphia Vireos, and two Olive Sparrows, the latter a new species for the station.
Posted by Tyler Christensen at 2:07 PM No comments:

Our final day of banding at Refugio Curu was slower than usual, giving us an opportunity to leave the banding station between net checks to hunt for photography subjects.  Not far from the banding table, a small shrub, one of the species in the genus Piper, yielded several fantastically beautiful insects.

While scanning the leaves and twigs of the Piper, something caught our eye that appeared, from a distance, to be a small black ant; upon closer inspection, however, we realized this ant was not an ant at all, but the thorax of an otherwise leaf-green treehopper called Cyphonia clavata. 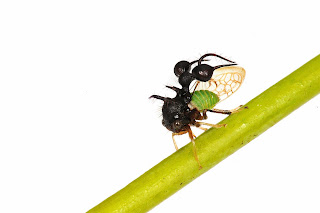 From either side, the extraordinary hood ornament of C. clavata appears to be a tiny ant, whose head would face opposite that of the hopper.  Many tropical insects masquerade as ants, because ants, with their cocktail of acids and chemicals, are generally distasteful.  It certainly fooled us at first, and would likely have fooled a would-be predator such as a bird.

Our second great find, which remained undetected until we finally recognized what it was that we were looking at, was an incredible-looking treehopper of the genus Cladonota.  The genus is restricted to the New-World Tropics, and contains some of the most ornate treehoppers in existence.  Each species is adorned with horns, bulbs, spikes, or other protuberances of varying shape and size. 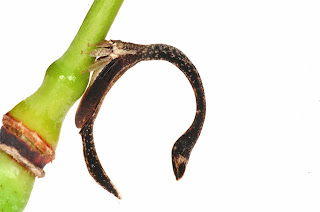 Posted by Tyler Christensen at 9:51 PM No comments: