We spent 18 days banding between our sites at Reserva Nacional Cabo Blanco and Refugio de Vida Silvestre Curu.  During that time we banded 281 birds (192 residents and 89 neotropical migrants), processed 60 that were originally banded by us either in 2011/2012 or 2012/2013 (38 residents and 22 neotropical migrants), and released 42 individuals (almost all resident hummingbirds) without bands.  Of all the birds captured, 29% (111 individuals) were neotropical migrants, which was slightly higher than last year's 24%.  During our three years at these sites the proportion of residents to migrants has consistently been close to 3:1. 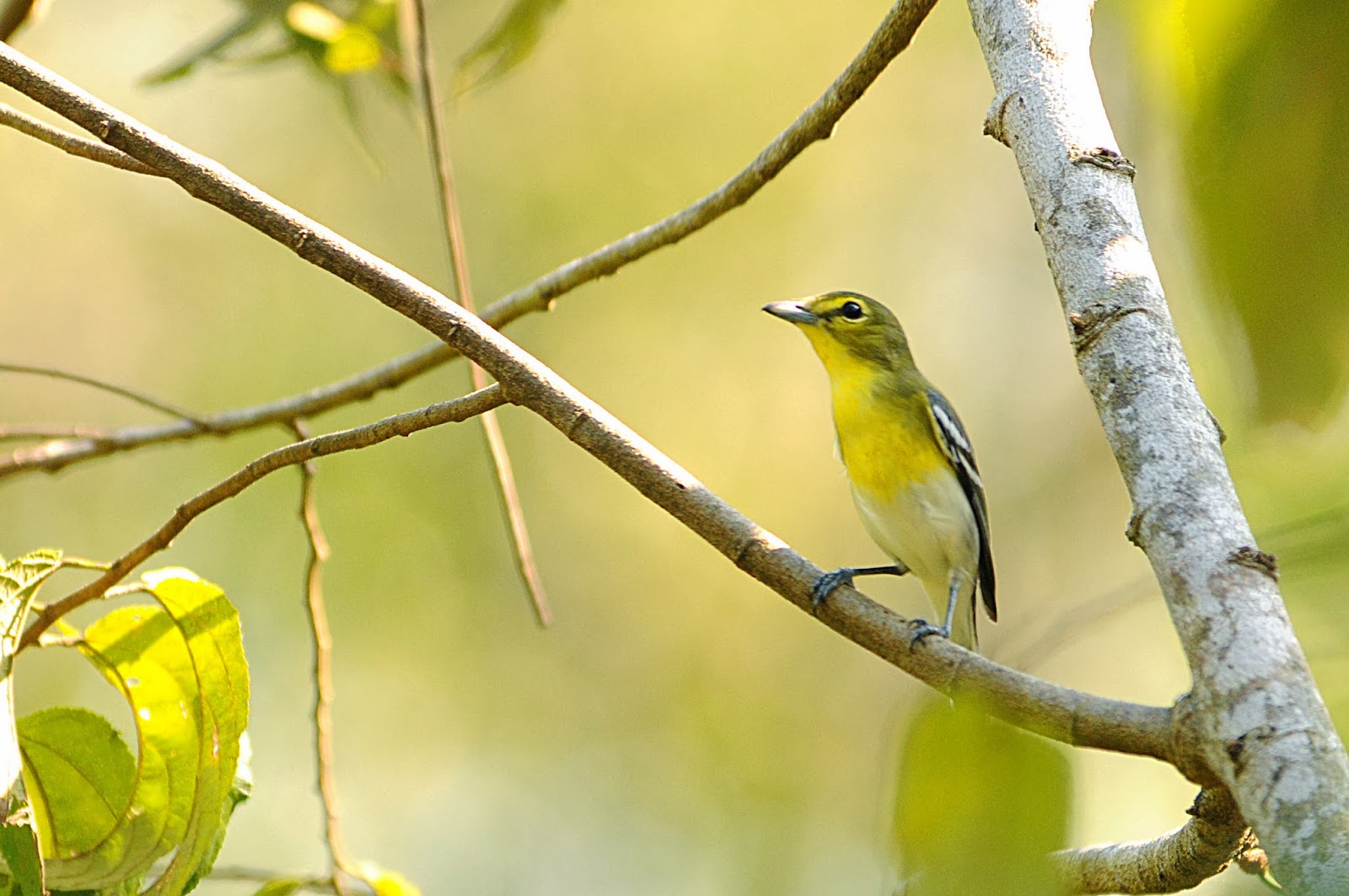 Additionaly, 20% of the migrant species we captured were birds that we had banded in previous years; these are birds that have traveled to breeding sites in North America and then back again, returning to the exact same wintering territories.  In fact, several of them were caught in the same net!

Our most commonly encountered neotropical migrants this year were Northern Waterthrush (N = 35), Tennessee Warbler (N = 26), and Prothonotary Warbler (N = 12).  Other notable captures included a relatively high number of Philadelphia Vireos, a single male Painted Bunting, and a recapture Wood Thrush; the latter was originally banded on December 19th, 2012 as a first-year bird.  Although we capture Wood Thrushes occasionally, this individual, now in its third year, is the first Wood Thrush that we have encountered in successive seasons.  The reason that encounters with this species are particularly exciting for us is that Wood Thrushes, according to the literature currently available, are not "supposed" to overwinter in this region of Costa Rica.  We believe, and such encounters strongly support, that Wood Thrushes do regularly overwinter in the region, albeit in small numbers.

Our most common resident species was, by far, Long-tailed Manakin (N = 59).  Trailing not-too-closely behind were Clay-colored Robin (N = 22), Black-headed Trogon (N = 16) and Gray-headed Tanager (N = 15).  Long-tailed Manakin has been our most common resident species every year, but this year the margin was staggering.  New species to our banding stations this season were Common Paraque, Hoffmann's Woodpecker, and Olive Sparrow.

At our new hummingbird banding station at Finca Pura Vida we processed 188 hummingbirds of 11 different species; 176 of these were new, and 12 were recaptures from last year.  Our most common humminbird (again, with a significant margin) was Green-breasted Mango (N = 68), followed by Steely-vented Hummingbird (N = 28) and our migratory Ruby-throated Hummingbird (N = 21).
Perhaps the most exciting species on this list are the Long-billed Starthroat and the White-necked Jacobin; if you followed our updates from last year's study season, you may remember that neither of these species is "supposed" to occur on the Nicoya Peninsula, and yet they make regular appearances at the feeders at Finca Pura Vida.  Since we began banding hummingbirds last winter, we have captured 5 White-necked Jacobins and 6 Long-billed Starthroats.  Is their presence on the Peninsula only seasonal?  Do they undergo a short-distance migration during the non-breeding season?  Or is there a small breeding population present year-round that has yet to be confirmed?  Further study may reveal the answer.

Overall 2013/2014 was a productive season for NPARS; between the new and recaptured birds at Cabo Blanco, Refugio Curu, and our hummingbird banding station at Finca Pura Vida, we processed a grand total of 529 birds, which included three species that were entirely new to our banding stations.

That's it for the numbers - our next post will consist of slightly lighter fare, with photos and anecdotes covering our favorite experiences from our six weeks in Costa Rica.
Posted by Tyler Christensen at 10:51 AM No comments:

Six weeks can go by so quickly!  It seems as though only a few days ago we were opening our first nets here on the Nicoya Peninsula.  But, whether we like it or not, our final days of banding in Costa Rica have come to an end.  Later we'll be posting highlights, photos, and banding totals from the entire six-week project, but in this post we're only covering our final banding sessions at our sites in Refugio de Vida Silvestre Curu and in Reserva Nacional Cabo Blanco.

Our last banding session at Cabo Blanco resulted in 10 new birds and 11 recaptures of previously-banded birds, representing a total of 11 species.  Among these birds was a second-year Worm-eating Warbler, only the third ever banded by our team, and the second one at Cabo Blanco.


The most commonly-encountered bird this session was Tennessee Warbler, which showed a big increase in the number of birds captured compared to the other two banding sessions at the site.  On more than one occasion we would find several in a single net, presumably having been foraging together, which Tennessees usually do on their wintering grounds.  Indeed, large flocks of Tennessees (up to 60 or 70 individuals) are not an uncommon sight.  For a bird that is only seldom observed in our region of North America (let alone captured and seen up-close), their abundance here in Costa Rica gives us a rare opportunity to learn to differentiate the sexes of first- and second-year birds.  There is so much overlap in the appearance of of young males and females that, even with experience, the genders of many birds remain unidentified.

Other notable captures from our final sessions included a recaptured Wood Thrush originally banded at Curu on December 19, 2012, an adult male Painted Bunting, two Yellow-bellied Flycatchers, and the season's only Yellow-throated Euphonia. 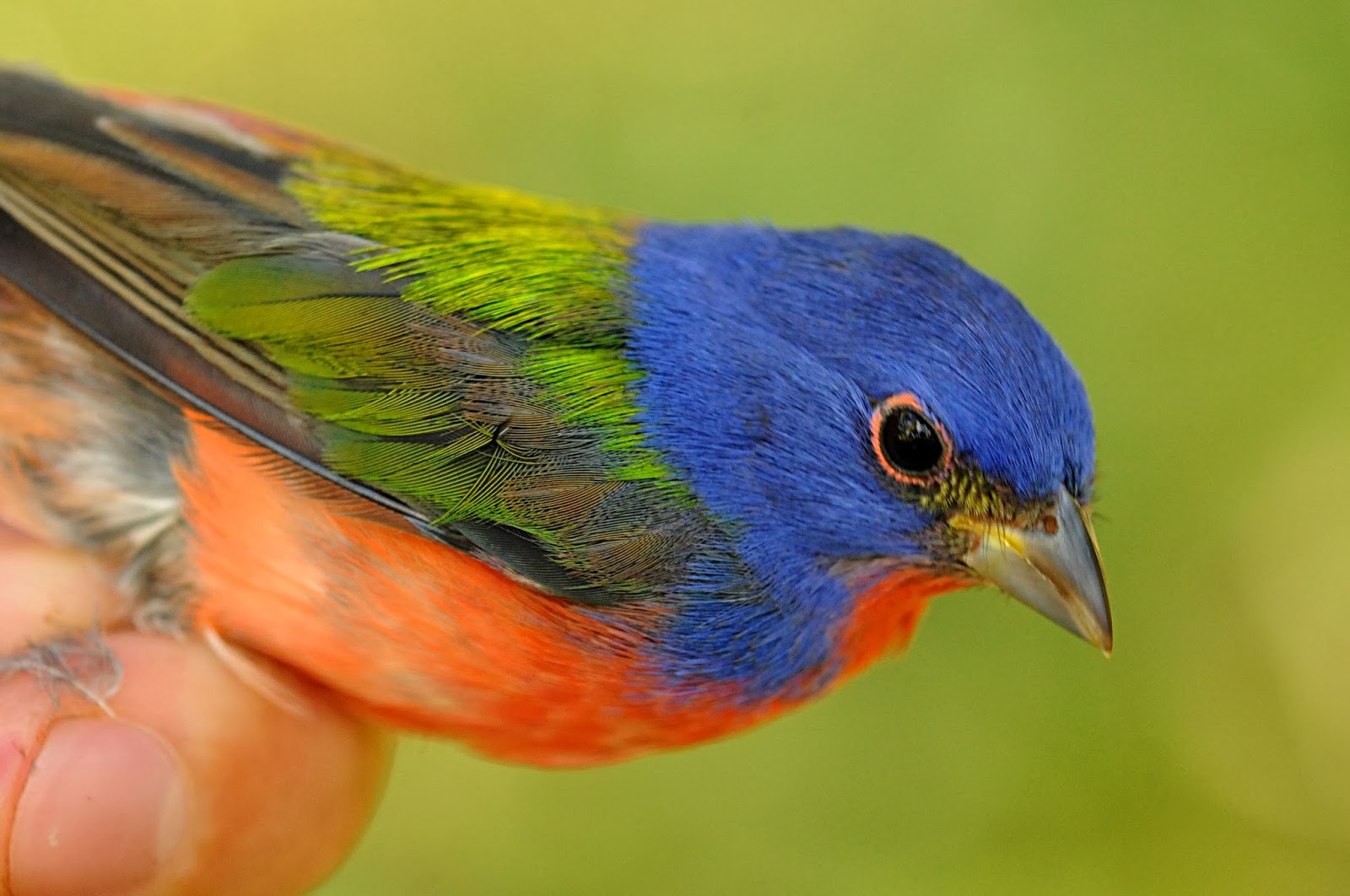 I either forget this detail or it gets worse each year, but the last banding day of the trip was a very sad one, full of nostalgia for another productive and exciting six weeks of research in Costa Rica.  After our final net check at noon, we processed the last birds (three Tennessee Warblers and a flycatcher called a Great Kiskdadee) and removed all our equipment from the station and surrounding forest and loaded it into the car.  It's interesting to see an entire banding station (a table, two crates of bird banding equipment, six chairs, twenty-two nets, forty-four net poles, and four volunteer bird banders) get packed into a small SUV.  The contents of the car were returned to our headquarters at Finca Pura Vida, the equipment to be stored until next year, and the banders to pack for their return home.

Posted by Tyler Christensen at 7:24 AM No comments:

After one of our last banding days at Cabo Blanco, our group stopped in Montezuma to buy groceries before returning to the Finca.  Two sounds drifted over the noise of cars, shouting, talking, and waves crashing against the adjacent Playa Montezuma.  First a loud, metallic BONK! followed by a piercing high-pitched squeak, both which of could be produced by a rusty gate being forced open; we knew this to be the sound of the enigmatic and renowned Three-wattled Bellbird, and it was singing from just up the hill from where we stood.

We ran up the road, pausing periodically for the bird to sing so we could locate its position.  The bird appeared to be singing from the treetops within the grounds of a hotel called the Luna Llena Lodge.  We followed a network of concrete pathways onto the hotel property, situated on a steep hillside overlooking the Pacific.  Finding a window through the vegetation that offered a view of the bird was very challenging; we spread out among the network of pathways, intruding on more than a couple of private cabins.  Eventually we found a spot where we could see, at the top of an Ylang-Ylang tree, a brown-and-white bird about the size of a pigeon. 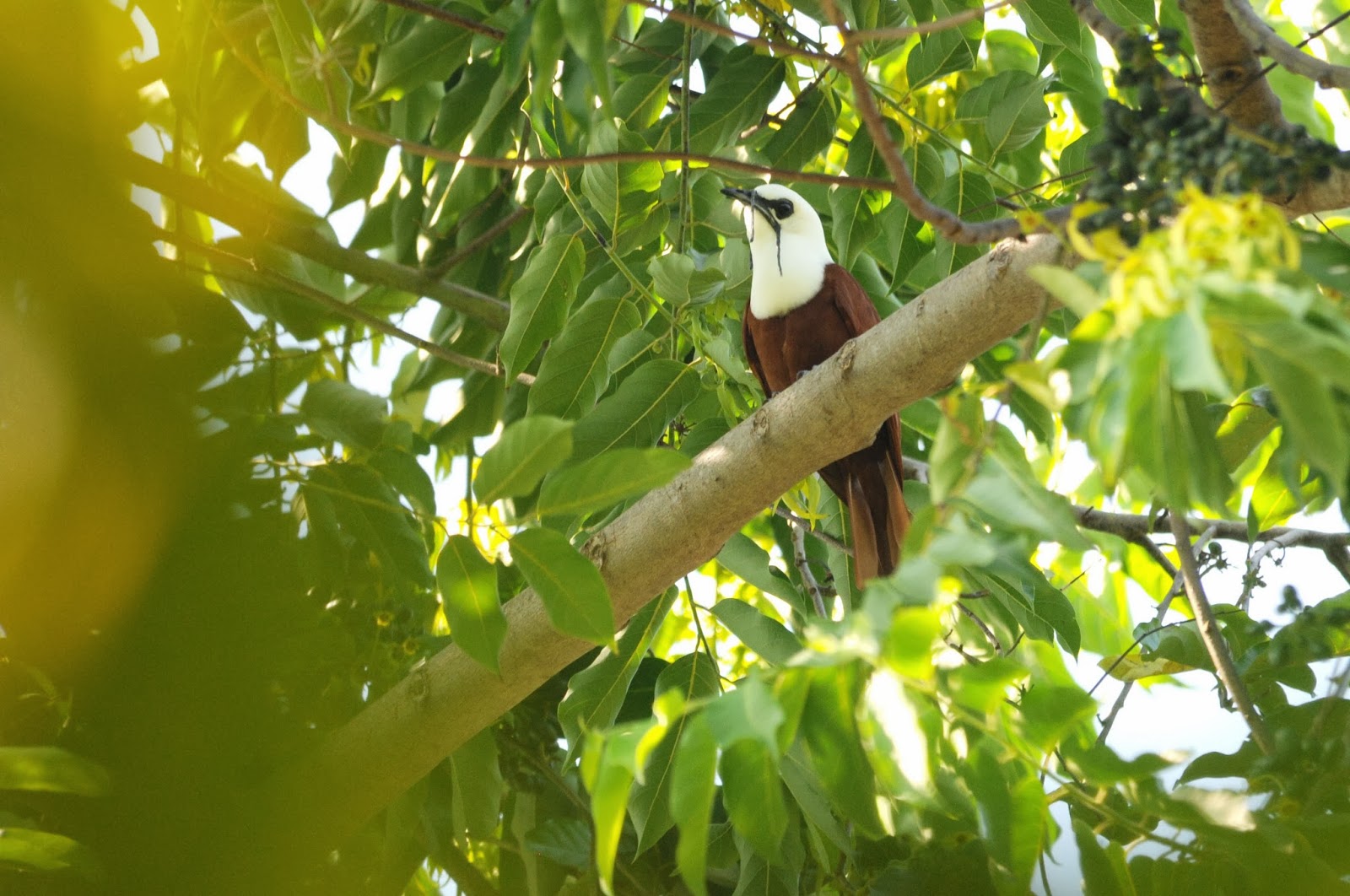 Two of us had our cameras, but not our telephoto lenses, and so ran back down the switchback paths, down the road, jumped into the car, started it, stalled it, cursed ourselves for not choosing a car with an automatic transmission, started it again, raced to the house, jumped the gate, grabbed the lenses, jumped back into the car, stalled it, cursed, started it again, and sped back to Montezuma, all in under 15 minutes (which, believe us, is very good time).

Three-wattled Bellbirds have one of the most complex seasonal migration patterns of Costa Rican birds.  As birds that eat almost exclusively fruit, their migration is dictated by regional and seasonal patterns of fruit ripening.  One study conducted in Costa Rica which contributed greatly to the knowledge of their seasonal movements involved capturing Bellbirds during the breeding season, radio-tagging them, and periodically relocating each individual via aircraft.  They found that by October the Bellbirds that bred near Monteverde had migrated to the Carribean lowlands, then to the Pacific lowlands by November, and were back in the Monteverde region by March to initiate the breeding season.  One of the birds that was banded near Monteverde during the wet season was relocated during the dry season at Reserva Cabo Blanco, where we operate one of our bird banding stations!

Their complex and widespread migration pattern poses challenges to the conservation of the Three-wattled Bellbird; not only must their breeding habitat be protected, but also the habitats in which they migrate and spend the non-breeding season.  Several worthy initiatives, including the Corredor Biologico del Pajaro Campana, are attempting to surmount these challenges, and are attempting to preserve biological corridors between the breeding and non-breeding regions. 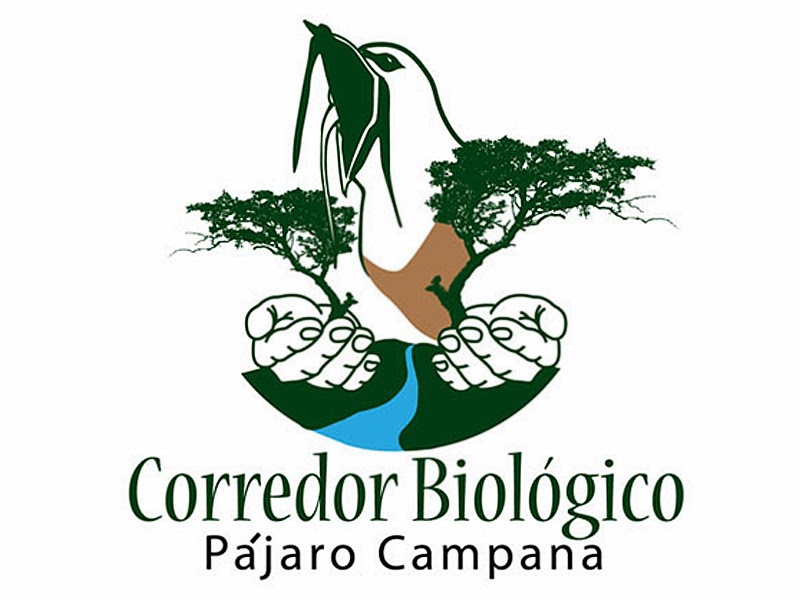 We are very fortunate to work in an area that has a high number of Bellbirds during the non-breeding season; it seems that they arrive on the Nicoya Peninsula shortly after we do, giving us the opportunity to see them each year.  One time we even saw one in our yard at Finca Pura Vida, feeding on fruits of an Ylang-Ylang (which seems to be a popular tree among Bellbirds; we have since planted more).  They arrived later this year than last, but early enough where we managed to observe one before our time in Costa Rica came to an end.

Posted by Tyler Christensen at 8:52 AM No comments: